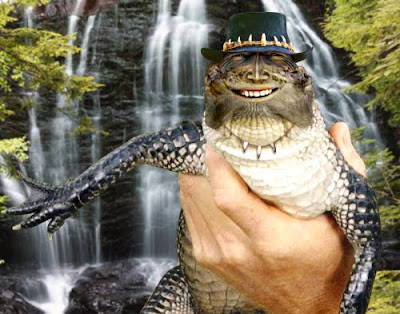 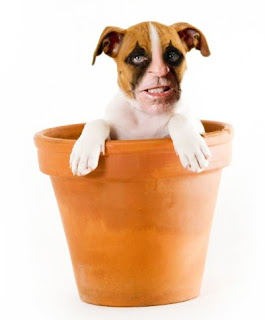 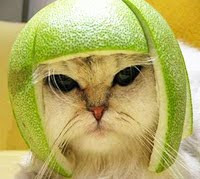 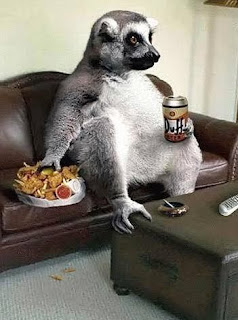 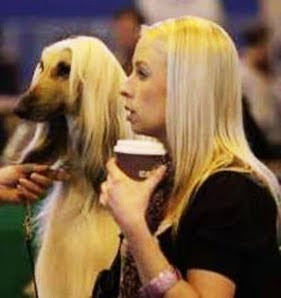 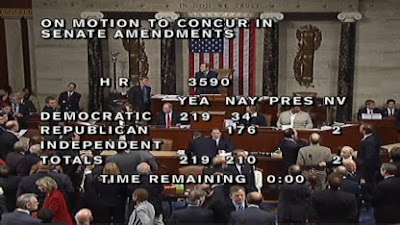 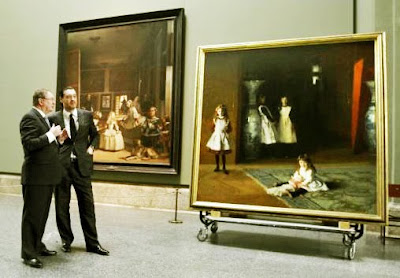 MADRID — In 1656, Diego Velázquez painted a 5-year-old girl with silky blond hair and a self-assured gaze in a murky palace hall. That girl was Spain’s Princess Margarita, and the painting, “Las Meninas,’’ is the jewel of Madrid’s Prado Museum.

More than two centuries later, John Singer Sargent painted another little girl, 4-year-old Julia Boit, sprawling on a faded carpet holding her pink doll and staring confidently at the viewer. The enigmatic portrait, “The Daughters of Edward Darley Boit,’’ is one of the greatest treasures of
Boston’s Mus 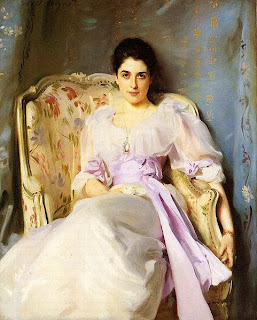 eum Fine Arts.
On the surface, the two girls have little in common: One wears a voluminous gown; the other sports a playtime pinafore. One is flanked by doting ladies in waiting, the other accompanied by her three older sisters, daughters of a lawyer-turned-painter from Boston.

But Margarita and Julia met in the imagination of Sargent, who studied “Las Meninas’’ closely during visits to the Prado in 1879 and was inspired to imbue his own work with echoes of the Velázquez masterpiece. Now these two girls are meeting for the first time, “face to face,’’ as Prado director Miguel Zugaza puts it.

Sargent’s iconic painting traveled to Spain last week and now hangs just a few feet from the Velázquez, in the center of the Prado’s main hall, where it is on view until May 30 as part of the museum’s “Invited Work’’ series.

“It’s a favorite in Boston, but here in Madrid it’s going to be seen by hundreds of thousands of people who never come to Boston and some who might come as a result of seeing this picture,’’ said Malcolm Rogers, the MFA director who traveled to Spain to mark the occasion and, standing in the Prado gallery, was admiring the Sargent through a crowd of tourists. 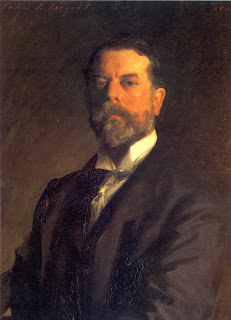 In 1879, Sargent was himself among the throng visiting the museum. He traveled extensively through Spain, and he made repeated visits to the Prado to study Velázquez works and copy “Las Meninas.’’ Now on display next to his painting, a Prado visitor record book shows three Sargent signatures. (In two, he oddly uses the name Gustavo instead of John.)

“Sargent would have been thrilled to see the painting in this museum,’’ said Erica E. Hirshler, senior curator of American paintings at the MFA and author of the recent book “Sargent’s Daughters: The Biography of a Painting,’’ which tells the story of this work. “People associate it so much with Boston, because it has been at the MFA for such a long time, but it is really a world-class, cosmopolitan painting.’’

Looking at the two portraits, Hirshler pointed to similarities in composition, light, and dynamics. She beamed as she described subtle parallels: how Julia Boit’s pose is a mirror image of Princess Margarita’s and how the glowing mirror over the Boits’s fireplace in their Paris apartment recalls the reflected image of the Spanish king and queen. Both paintings, she noted, convey a snapshot sense of arrested motion, froze 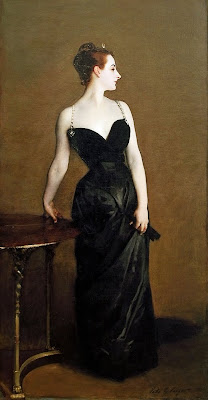 n moments in the play of the Boit girls and the courtly dynamics that swirled around the princess.

“This is once-in-a-lifetime opportunity to see the two together,’’ Hirshler said.
Indeed, the Prado does not loan “Las Meninas,’’ the centerpiece of its collection, and the Sargent work has rarely traveled since the Boit daughters donated it to the MFA in 1919. When it returns from Spain, “The Daughters of Edward Darley Boit’’ will take its place of honor in the MFA’s soon-to-open Art of the Americas Wing, said Rogers, alongside the two blue-and-white Japanese vases that are depicted in the painting dwarfing Julia and her sisters.

Sargent, of course, was not the only one of his generation to seek inspiration from “Las Meninas.’’ A wave of late 19th-century and early 20th-century artists, including Manet, Degas, Picasso, and Bacon made pilgrimages to the Prado to study Velázquez’s technique, and the Spanish master touches many of their works.

But Prado curators consider Sargent’s painting especially intriguing. “Of all the tributes to ‘Las Meninas,’ Sargent’s is the most emotional,’’ said Zugaza, the Prado director. “He takes the structure of ‘Las Meninas’ and transforms it into a modern painting. It’s not so much a tribute as a dialogue between two artists.’’

Zugaza said he suggested Sargent’s return to Madrid when he learned that the painting was about to move for the MFA’s expansion. “But the one who really wanted to come was Sargent himself,’’ he quipped.

Boit commissioned the portrait of his daughters in 1882, three years after Sargent copied “Las Meninas.’’ The two men belonged to a circle of expatriate American artists and writers, including novelist Henry James, who flocked to 1870s Paris. According to Hirshler, they remained friends long after Sargent completed the portrait, suggesting Boit was not fazed by the work’s unorthodox composition, even though critics at the time considered it eccentric.

“Both Sargent and Velázquez had patrons who were lovers of art,’’ said Javier Barón, the Prado’s chief curator of 19th-century painting.

“Boit was a painter himself, and Philip IV was the best collector of his time. This gave both artists the freedom to resolve their portraits in an unconventional way."

Today, Sargent is praised for expertly combining lessons from the past with what Hirshler terms “the nervous spirit of his own age.’’

But can Julia Boit and her sisters hold their own in the presence of the Velázquez masterpiece, one of the most revered pictures in the world?
“I was worried about it,’’ admitted Hirshler, shuttling her gaze between the assertive, round-checked girls with satisfaction. “But the Sargent is a very strong picture in and of itself. It has a soul of its own.’’ 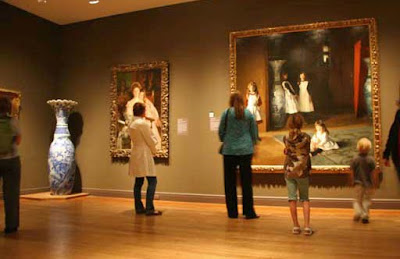 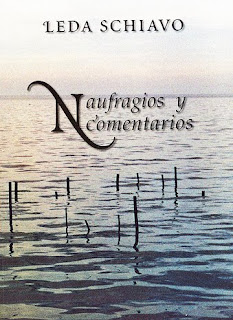 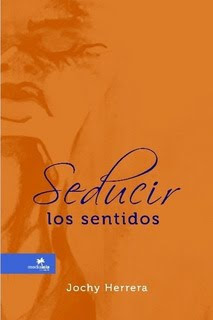 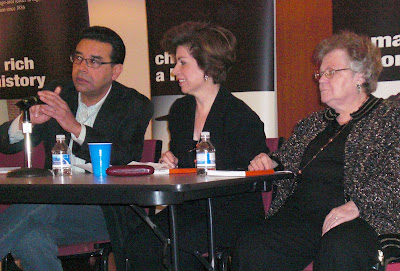 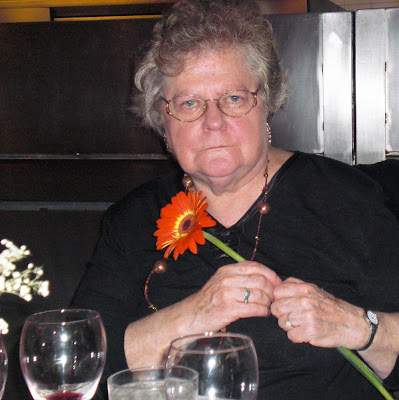 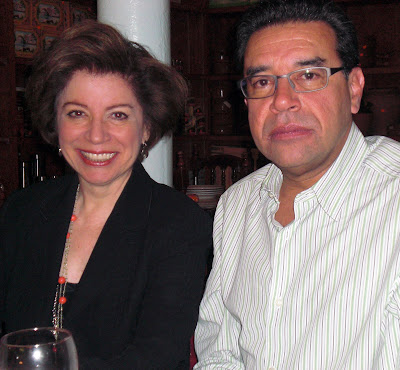 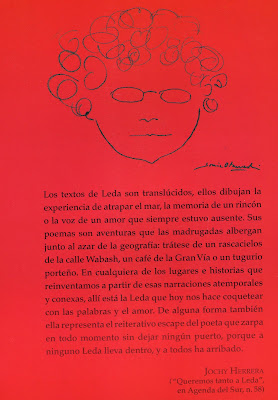 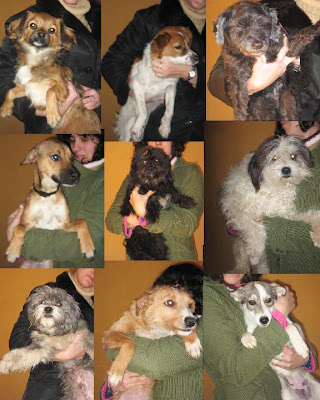 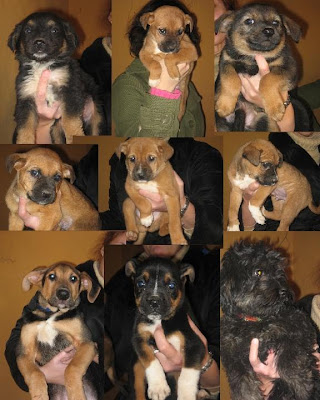 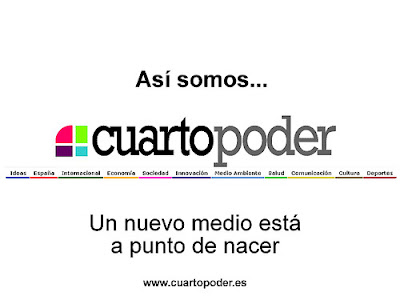 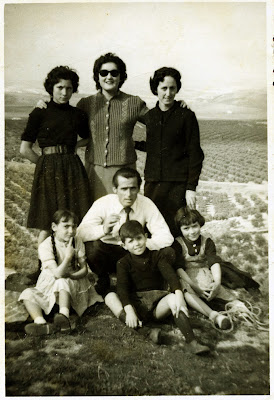